I’m pleased that my photograph, Dunluce Castle, was selected as one of ten
pieces in the live auction portion of the RMG Exposed fundraiser event that took place on Saturday November 10. Is was exciting to watch the fast and furious bidding on it.  Additionally, there were 32 outstanding photos in the silent auction. There was standing room only. 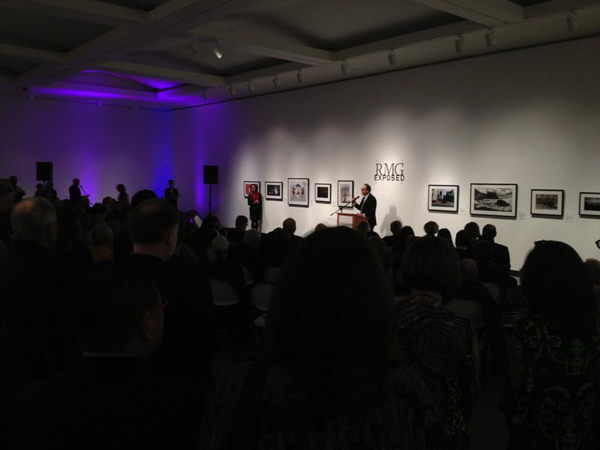 Dunluce Castle is the second to the screen right of Waddingtons’s auctioneer Stephen Ranger.
Thanks to Juror’s Dorette Carter, Erin Elliot and Gary Greenwood for choosing such a strong selection of work.
RMG Exposed is The Robert McLaughlin Gallery’s annual fundraiser. Over the past two
years, they have raised funds that support their education and
programming initiatives, benefitting students, at risk youth,
families, teens and other community members. In addition,
this event raises awareness of contemporary photography.
Musical entertainment was provided by The John Lennard Quartet.
Sponsors include RBC, Stephen Bulger Gallery, Pikto, Robert Aldsworth’s
Photo World, Concrete Contemporary Auctions and Projects, The Framing
Guys, The Albis Group, Harex and Durham Region.